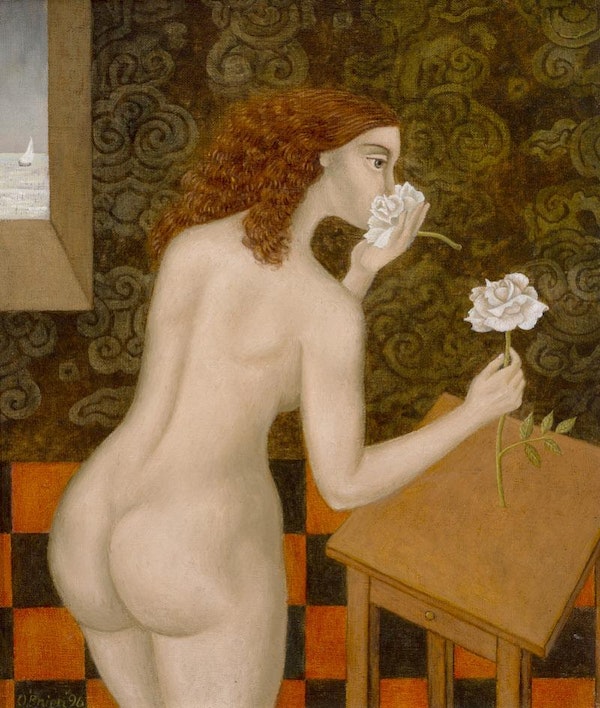 Chasing Beauty presents a series of paintings by Patricia O’Brien over fifteen years. This is a rare chance to see art that simply celebrates beauty. Patricia O’Brien’s paintings present ‘woman as muse’, celebrating their beauty in a similar way to the pre-Raphaelites whose art was also at odds with art of their time, choosing instead a pursuit of the aesthetic – art for beauty’s sake - which they articulated through their chosen muses, symbolism and a recall for painting pre–Raphael, particularly to the late Middle Ages and Renaissance.

O’Brien has made her own journey in painting for fifty years paying tribute to the art that she admires along the way. Her nudes have a classical sensibility as do the pre-Raphaelites. Reclining Nude is reminiscent of Titian’s Venus of Urbino. Her love of oriental painting is clear in recent paintings such as Golden Evening and Morning. In some paintings, her models are dressed simply in the fashion of the day, however her subjects have a stillness and dreaminess, at times an ethereal beauty about them, and are often surrounded by nature or gazing out at nature.

O’Brien’s strives to create perfect finish, whether it is flawless skin or gossamer fabrics. Her domestic settings are adorned with intricately patterned rugs and wall-papers, redolent of the rich tapestries of Renaissance art. She plays with perspective so that carpets and tiles are upright at odds with the realism of her nudes. Her palette is rich and soft, with folds of fabric that enhance her figures.

O’Brien has exhibited many times at Royal Academy Summer Exhibition and her work is represented in the Bridgman Art Library. The Fruit Eaters was the chosen image used to promote the Academy’s 22nd Anniversary year. For twenty five years, collectors in Europe, the United States, Canada, the Netherlands, Ireland, New Zealand and Australia have sought her work.