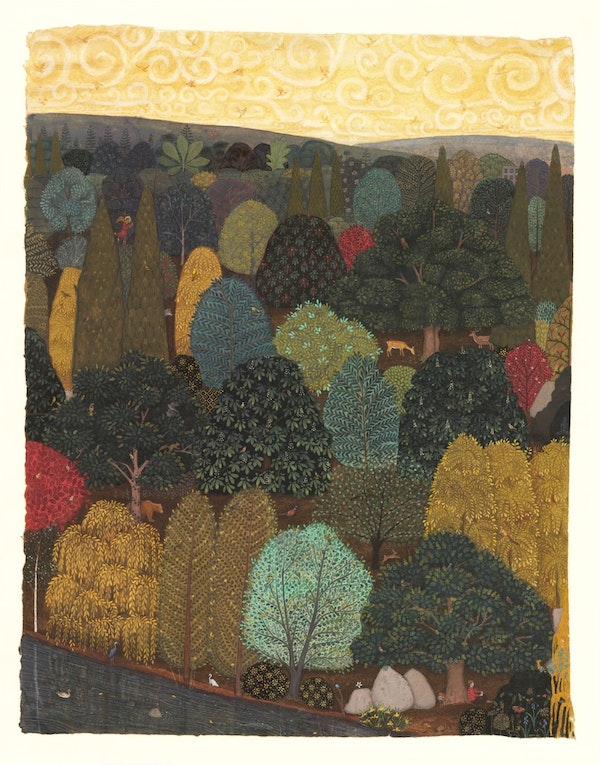 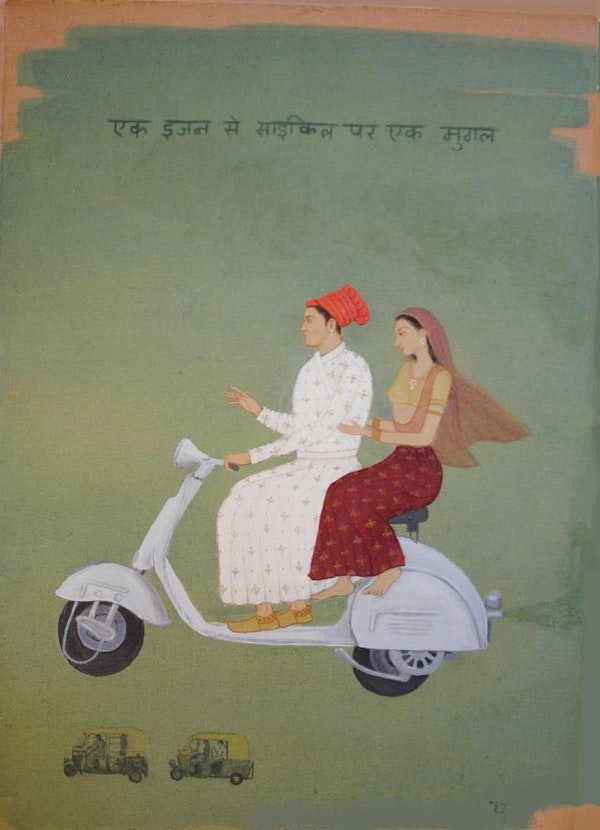 Mughal on a Vespa 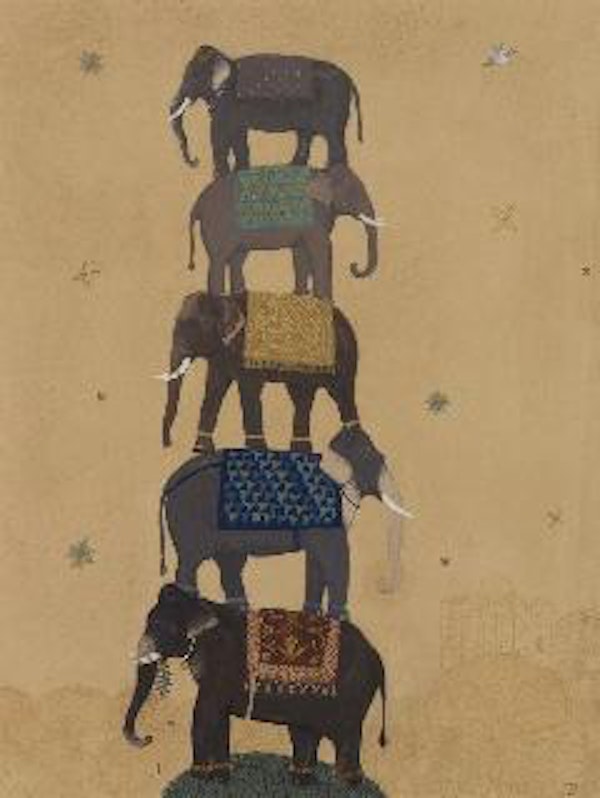 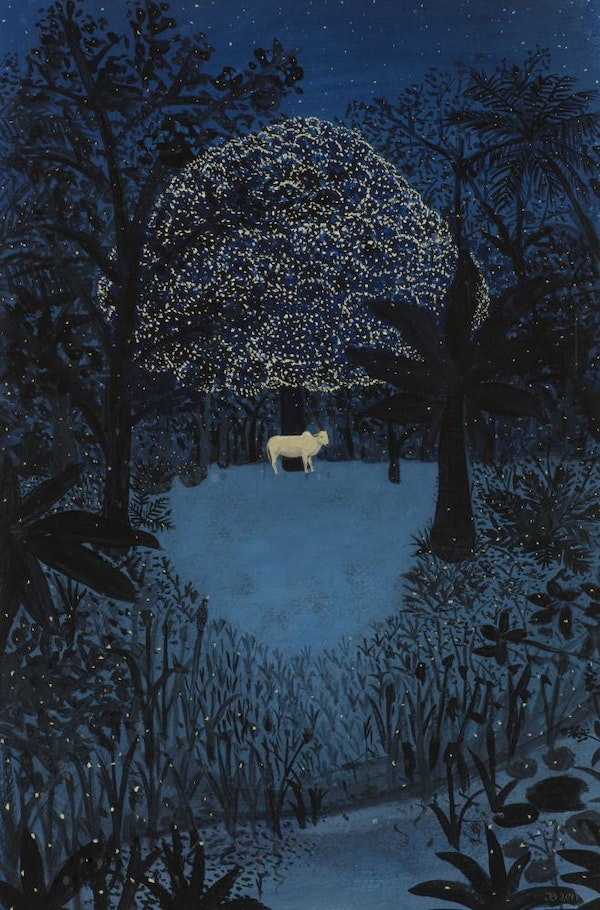 Night of the Glowing Sembar 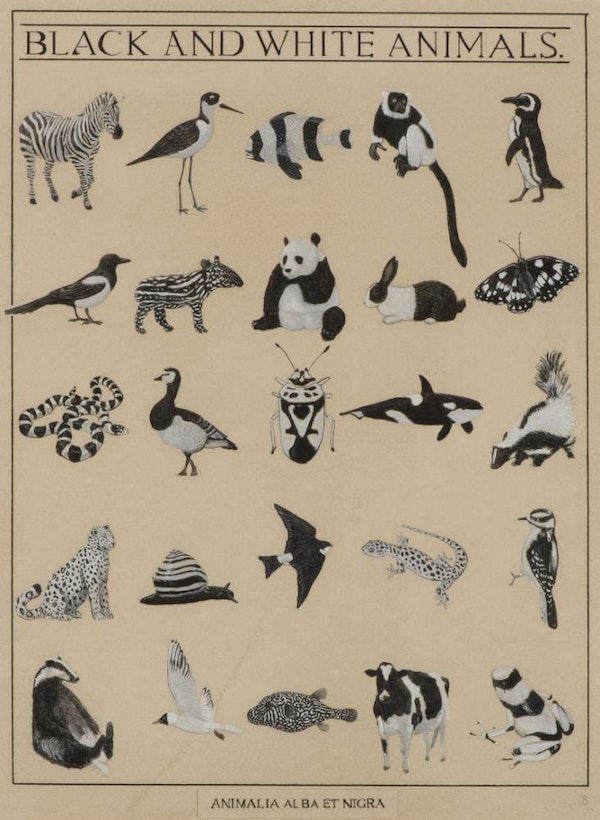 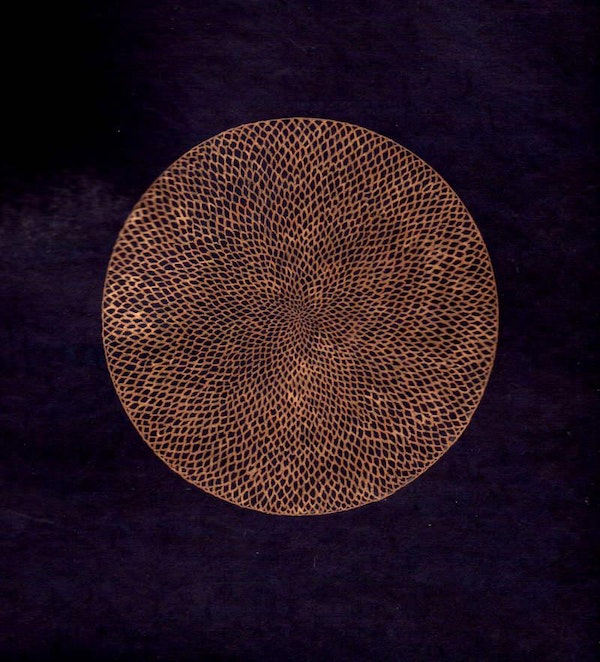 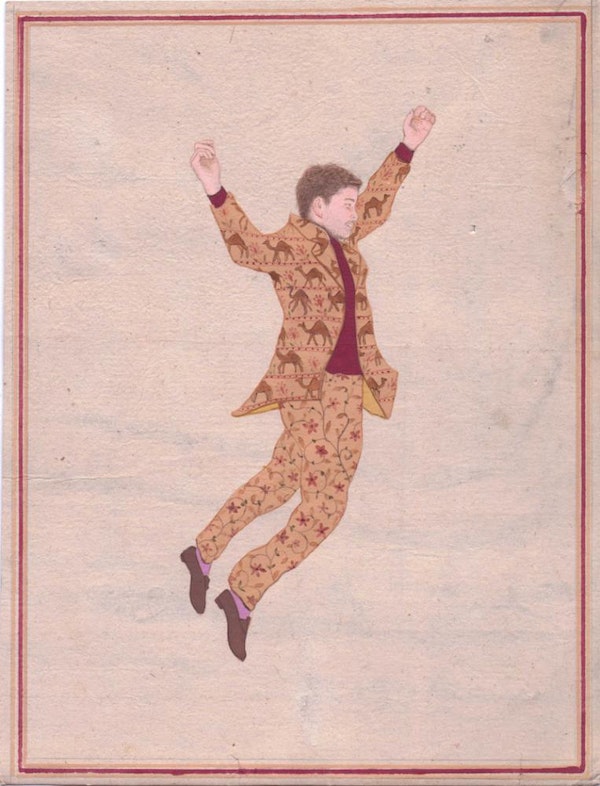 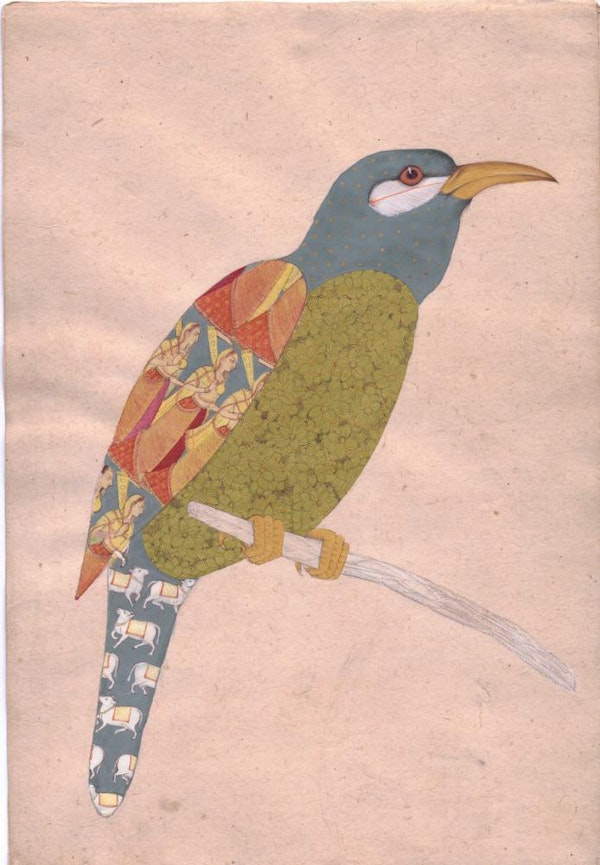 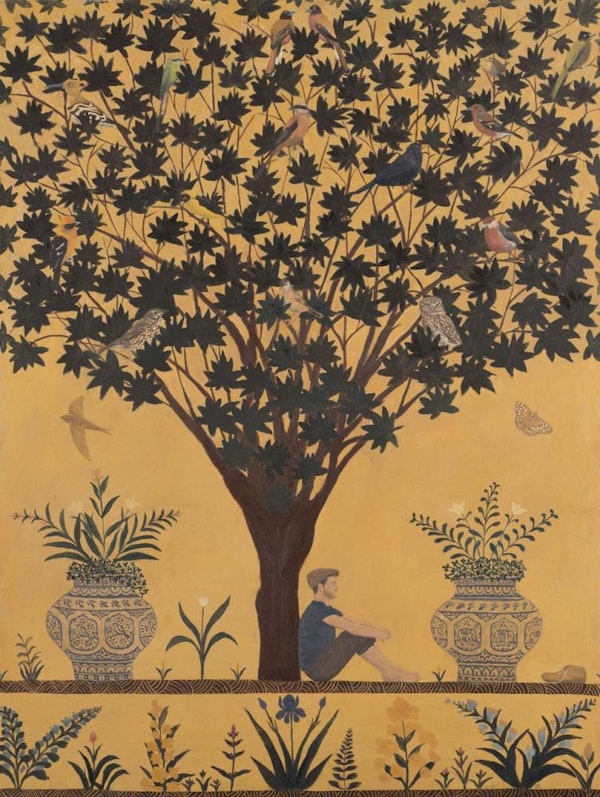 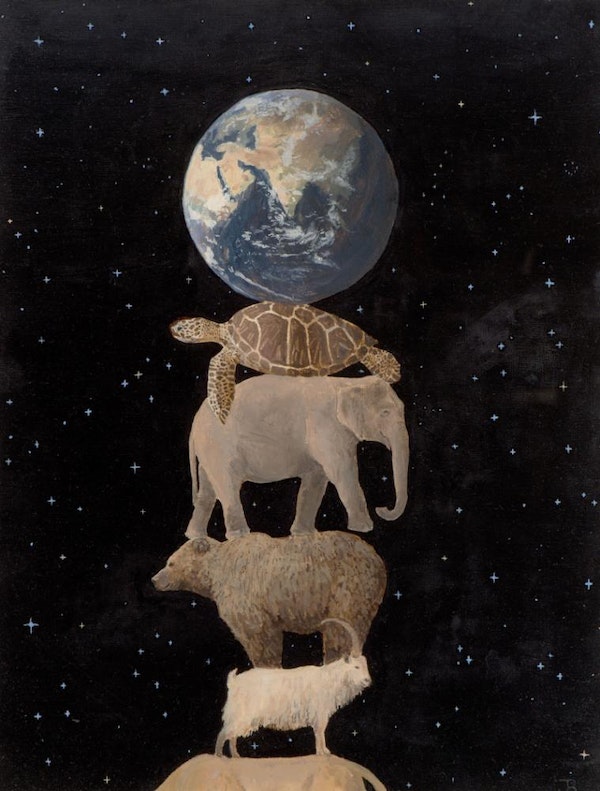 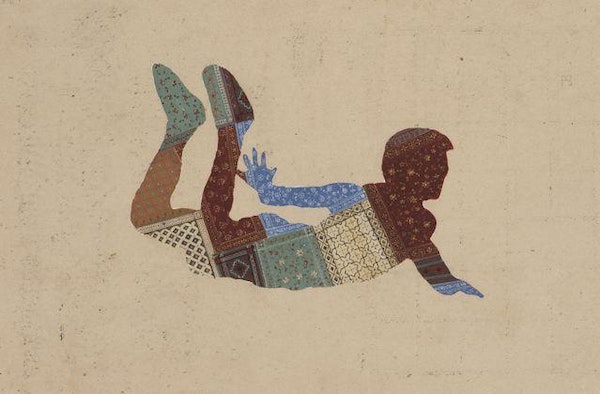 FREEFALL : An Exhibition of Contemporary Indian Miniatures by JETHRO BUCK

JBFA presenting Jethro Buck at Art Jericho. Jethro Buck’s fascination with the ancient art of Indian miniature painting is core to his work. It is not only the aesthetic beauty and fine workmanship that has captured his imagination, but also the fables and mysticism that has created such rich and exotic art for thousands of years. FREEFALL is an exhibition of around 30 paintings that blend East with West. Incorporating his own expression, narrative and scale, to the form and decorative style of classical Indian miniature painting, Jethro has composed a contemporary body of work inspired by the experience of his journey to India, a country both ancient and modern.

In 2010, after three years at Falmouth College of Art and a year’s teaching at St. Edwards School Oxford, Jethro travelled to Udaipur – the City of Lakes - to visit a friend who was teaching there. Exploring the backstreets of the city, he saw through an open door, a young boy sitting cross-legged on the workshop floor, grinding minerals with pestle and mortar to make pigments. Intrigued, he stepped inside and discovered Master and a team of artisans working together to create classical Indian miniature paintings. He describes it as stepping back 500 years in time, and spellbound by the scene before him, he asked if he might sit and watch – which he did for some hours. Returning the next day, he asked again if he might sit and watch, and when reappearing a third time, he was given a bowl and tools and invited to work - and so began Jethro’s exploration of miniature painting.

After an intense three weeks, he returned to the UK determined to study in India. He applied to INTACH (India National Trust for Art and Cultural Heritage) for a travel grant, and was awarded £1000 for flight and travel. He researched the possibilities for apprenticeship and was referred by artist Olivia Fraser, to miniaturist Master Ajay Sharma who invited him to Jaipur – the Pink City – to work with him as a student in the studio.

Unlike the surface craft of art churned out by street artists in cities across India, Ajay Sharma is Master of one of the few remaining artisan studios with a full apprenticeship system that adheres to the cannons of the past – a prescribed, almost ritualistic process, with a strict regimen for the preparation of base and colour - where application is a finely crafted process followed precisely, and where ego and the individualism of art as we know it in the West, is sacrificed for an art form which has grown up out of, and remains strongly bound to, religious narrative.

Working with Ajay Sharma and his wife Vinita, Jethro learned to recognise the many different styles of classical Indian painting particular to different regions. His preferred schools reflected in his own work are Mughal with its combined influences of both East and West and a heightened sense of naturalism reflected in the faces, where one face is distinct from another; Rajput, with its typically flat planes of colour; and Kangra, from the foothills of the Himalayas, for its stillness and less saturated colours, the haunting night scenes and distinctively detailed trees.

Jethro learned the traditional methods for preparing pigments where minerals such as Malachite, Cinnabar and Lapis Lazuli are ground to a powder and bound with gum Arabic, how to make a perfect brush from the hairs on a squirrel’s tail, and under the keen eye of both Master and wife, how to paint in classical Indian miniaturist style.

In terms of composition, Jethro’s FREEFALL has been inspired not only by the traditional tales and religious stories depicted in the miniaturist paintings of old, but also contemporary daily life on the streets that he observed around him. Udaipur, an ancient city set in the desert state of Rajasthan, was originally irrigated by the Mughals with water from surrounding lakes. Jethro photographed the local boys as they launched themselves joyously into the water and these, together with photographs of the artist himself recreating these leaps and falls, form the basis for many of the paintings in this exhibition. Essentially Jethro Buck’s paintings express the vitality and freedom, the FREEFALL experience of leaving home to explore India in all its multiplicity.

Jethro Buck completed an MA in Traditional Arts at The Prince’s School of Traditional Arts, London in June 2014. Born in 1986, he attended Falmouth College of Art 2005-8, following a year of Art Foundation at Abingdon & Whitney College in 2003. After university, he worked at St. Edwards School, Oxford as a teaching assistant and technician where he was also Artist in Residence.

Jethro exhibited in a group exhibition Rising Stars at The Coombe Gallery, Dartmouth in 2009 and had a solo exhibition at North Wall Gallery, Oxford in 2010.

INTACH grants are awarded to British students and academics who wish to learn traditional Indian crafts.