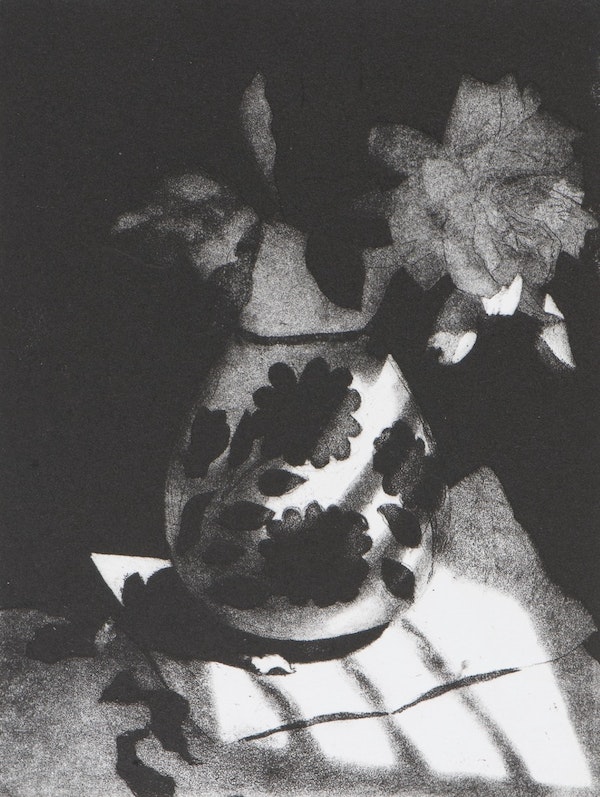 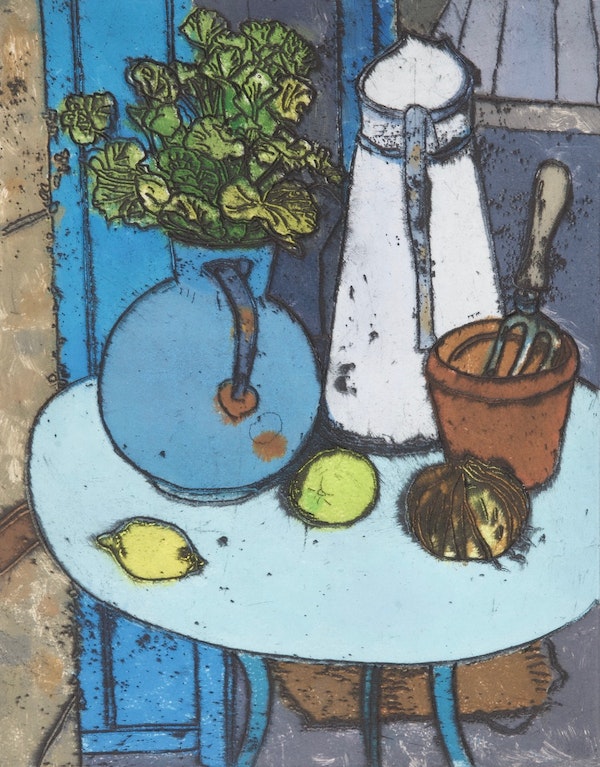 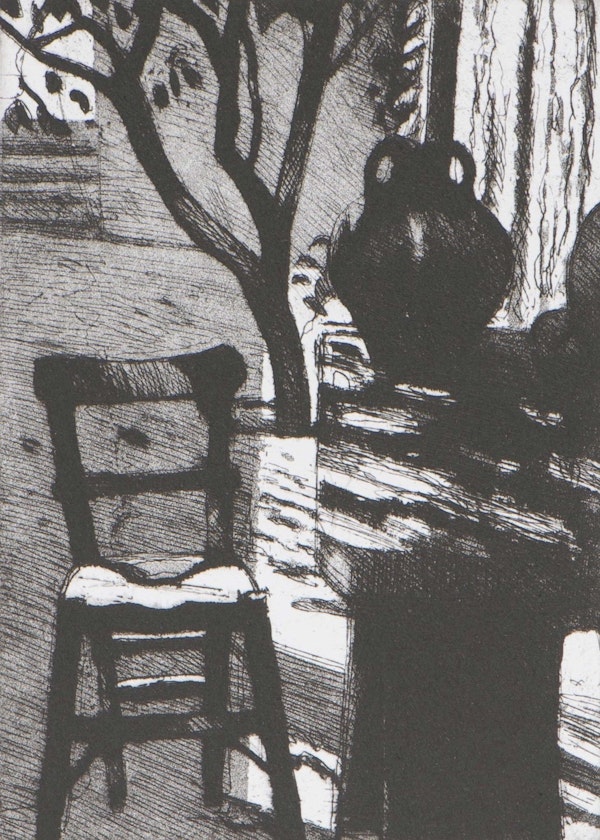 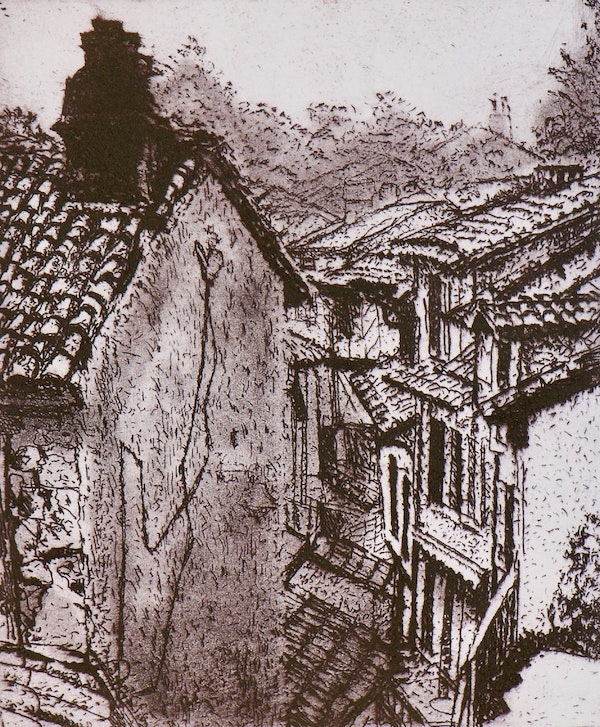 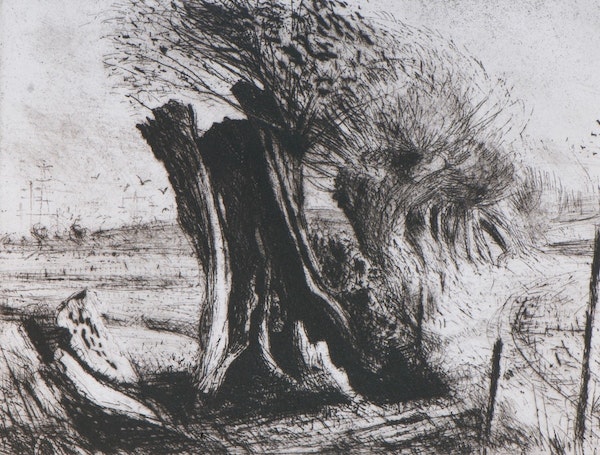 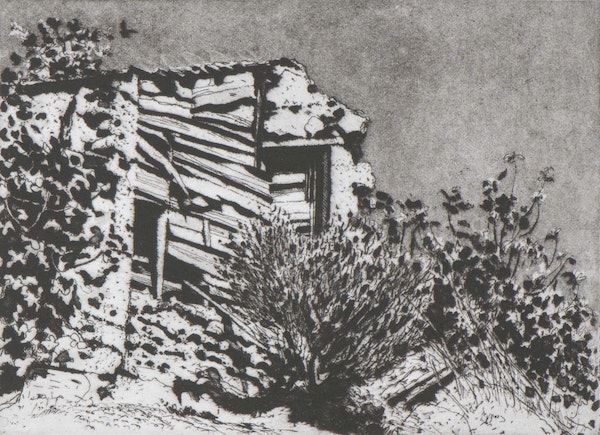 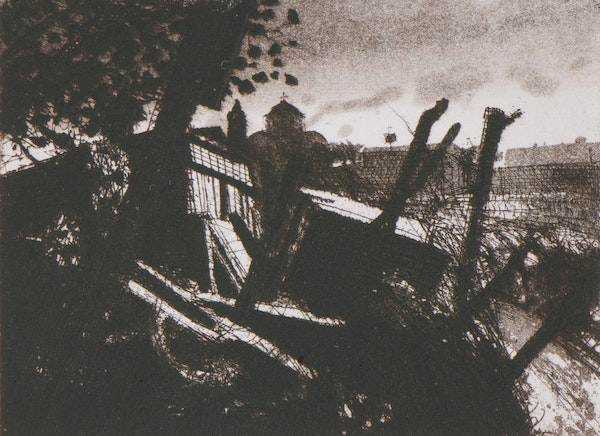 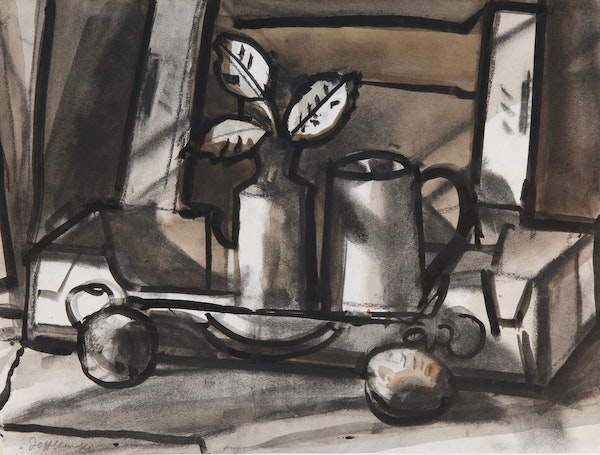 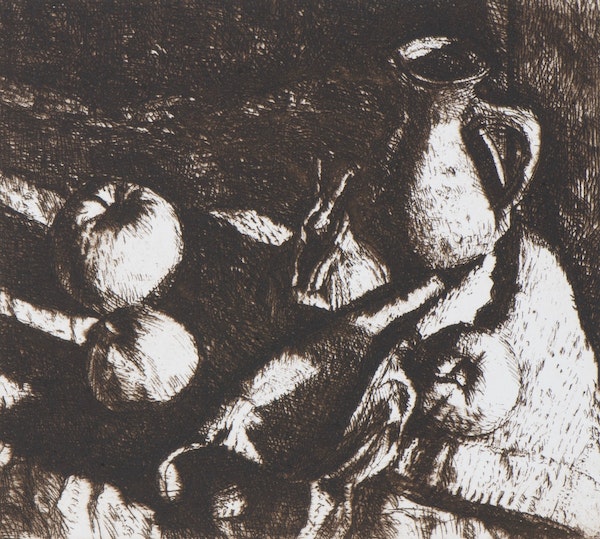 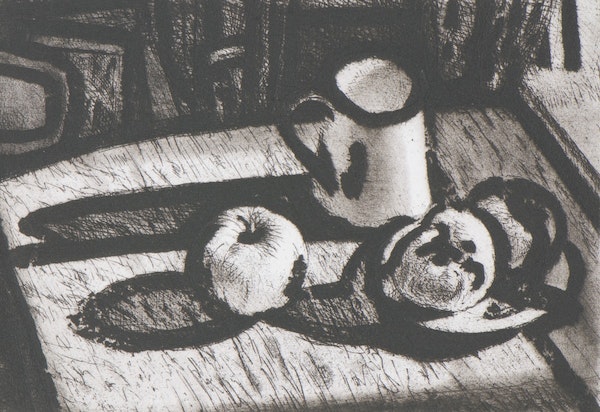 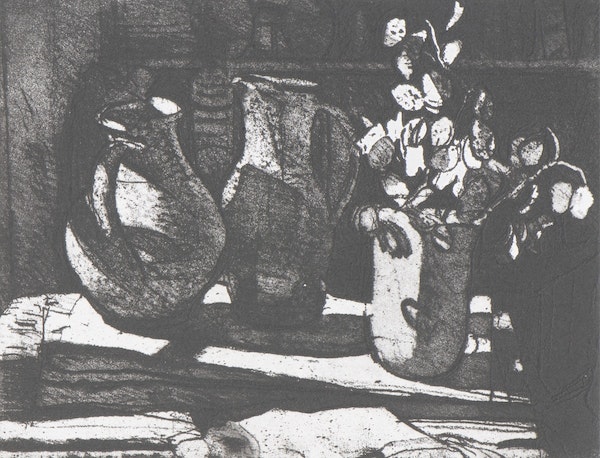 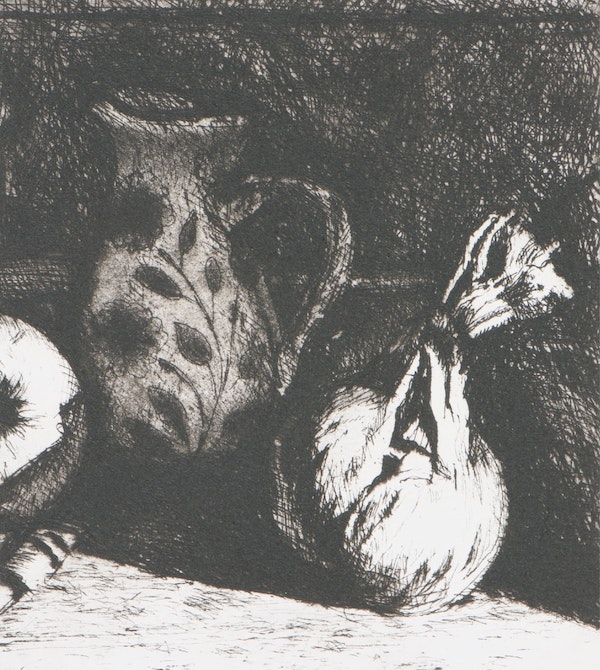 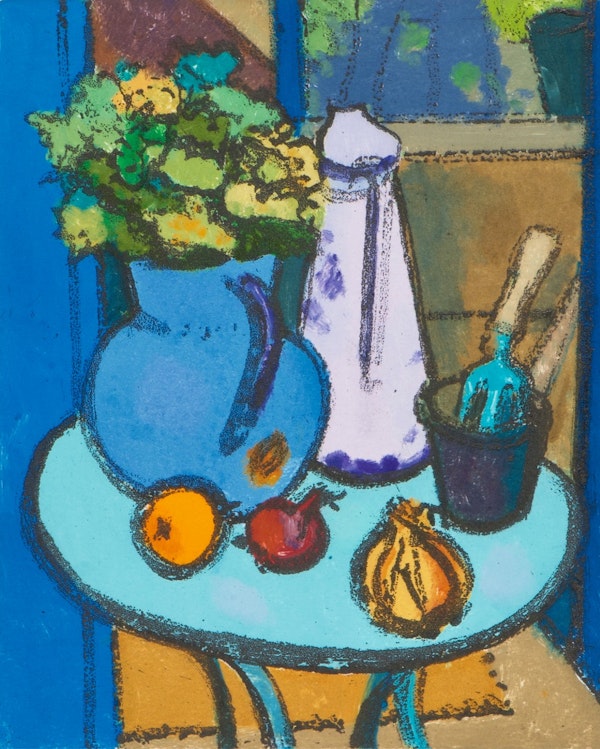 ‘Chairoscuro’ translates literally to ‘light-dark’.  It is a technique that originated in Italy in the 1600s, initially in woodcuts by Ugo da Carpi, to create both form and drama.

*The technique was developed fully through the 1600s by artists such as Leonardo da Vinci, Rembrandt and Vermeer.  One of its strongest exponents was Caravaggio. His iconic paintings such as ‘The Calling of St Matthew’ (1600), ‘The Entombment of Christ’ (1503) and ‘Bacchus’ (1593) used light and dark to heighten dramatic effect. *

Caravaggio’s personal life was as dramatic as his paintings.  He was a fighter, easily provoked and provocative, often involved in brawls. He was convicted of murder, but also lauded by the highest. At times he had to flee for his life.  He sought a papal pardon but died prematurely in middle years at 39 whilst travelling, and it is unknown whether he was murdered, died of fever, or indeed of lead poisoning.

Contrasting light and dark to create drama and mood, Chiaroscuro has been used by artists for over four hundred years across different media to include painting, drawing, etchings and photography ……… Chiaroscuro at its most dramatic, known as tenebrism, was Caravaggio’s legacy to artists known as the ‘tenebrisi’ who favoured his methodology.

Piranesi, Architect and Engraver, (1720-28) is renowned for his beautiful etchings of the ‘Ruins of Rome’ and the ‘Carceri’.  Through exaggerated scale, perspective and Chiaroscuro, he captured the theatre of a fallen empire, peopled with figures dwarfed by edifices.  The drama is heightened by trapeziums of light streaming between pillars and open-skied complex constructions, spotlighting the tableaux beneath.

Four centuries on from Piranesi, in Bologna, painter and etcher Georgio Morandi underlined this with a quieter conversation in flatter terms of tonal subtlety, using local landscape and studio paraphernalia rather than figures. Clearly Morandi and Piranesi are much-loved mentors and muses to Jeff Clarke.

Jeff Clarke : “Composer Herbert Howells said ‘the themes which work best, are those that choose you’.

Light and shade have certainly laid a long, exciting and often heavy hand over seventy of my eighty-five years.  It’s a very old theme in Art History, ‘Chiaroscuro’ : surface vibration, time passing, metaphor, destra sinistra,  or what you will.

Our radiant sun is a great gift, an absolute necessity, and it’s rising and falling does not depend on the stock exchange, or indeed art.  We take it for granted at our peril….

Not exclusive by any means given the independence of line, and colour if required, but egged on by early years in the sunshine of Italy and Crete, I have been involved in recurrent bouts with light’s perpetual motions, life-giving angles and continually shifting shapes which develop into a chess game, a dialectic of illumination and camouflage full of apparent surprise.  Working in places of classical and romantic history is a powerful stimulant, but my real job for a long time has been to try and capture some sense of the precious irradiation of the everyday”.

Black and White, is the backbone of Jeff Clarke’s practice.  His skill is exploring the full spectrum betwixt the two, creating compositions that are flooded with light, where nature morte is brought to life.

Initially when discussing this exhibition, Clarke was determined to exhibit prints, etchings and drawings in monochrome alone.  Sixty years in the studio and a classical training has made its mark.  His commitment to line and form in capturing the light is unrelenting, and the excitement of the challenge is evident in that gleam in his eye, and indeed in his work.  Clarke describes the dialogue between light and dark as ‘inescapable in every sense’.

Working largely sur le motif, he juxtaposes jugs and pots of brushes on tabletops with fruit, perhaps apples or onions.  Each day, the challenge is on - his mantra is to elevate the everyday through form and light.

In Boxing and Shadows, strident lines in ink and charcoal, delineate grocers’ boxes, an enamel jug and potted plant. Two apples roll into the foreground.  A subtle sepia wash of the empty box interior in the background, and the skin of the apple in the foreground, opens up the space. Clarke’s triumph of Chiaroscuro is complete. His composition is sublime, infused with the nuances and inflections of dancing light, defining form.

Clarke is a Master Printmaker of decades.  He attended Art School in the early 1950s and considers himself fortunate to have been taught by George Hooper, and Raymond Cowern who emerged from the Royal College of Art during the etching boom in the 1930s.  Following in Cowern’s footsteps, Clarke was awarded the Prix de Rome in Engraving, spending two years in Italy, and thus began a lifetime’s exchange with the Mediterranean.

For more than sixty years, Jeff Clarke has been travelling to France and Italy for the crisp light of Spring and the softer tones of the Autumn.  In the 80’s he made regular visits to Crete as draughtsman to the British School of Archaeology recording antiquities and relics such as Minoan pots unearthed at Knossos.  The history and discipline of the classical is woven into the fabric of his practice.

Perfecting his form, he would have been working in that singularly harsh and striking light that sets Crete apart and reminds us that geographically it is as close to the Middle East and North Africa as it is to Western Europe. Distinct from the softer light of Italy or the Auvergne, the sun in Crete - like the screaming of the cicadas during siesta - is unrelenting, casting clean lines and dark shadows that contrast strongly with a sun bleached landscape. It is these extremes and polarities of light that characterize Clarke’s work.

Over years of sun-saturated days working en plein air, Clarke has built an extensive portfolio of etchings, prints and drawings capturing the roof tops of small, unassuming French towns, shutters closed in the afternoon heat, the quiet of deserted side streets. But as drawn as he has been to the timeless beauty and romance of France and Italy, so he has been captivated by the raw, brittle landscape across Crete and Greece where houses are ever yet to be completed, workmans’ trucks loaded with the detritus of construction straddle the verge, the chaos of wires above ground, distinct and scratchy, contrasting with giant cactus and ancient olive trees that spill over dusty walls.

Working from his home and studio at Folly Bridge, Clarke carries his observations of the Mediterranean light to the Oxford suburbs. Location is secondary.  The intensity of his work is matched across all subjects and media, whether it is washing on the line across the backyard terraces beyond Folly Bridge, or an empty chair in a quiet corner of a Knossos garden, classically composed, the afternoon light stretching across the late afternoon. All is expressed in simple black and white.

The purist in Jeff Clarke would challenge me, but I maintain a quiet shout for colour because Jeff Clarke’s attention and intense study of monochrome over sixty years has rendered him master of both.  His coloured etchings, hand-coloured drawings and collages speak for themselves. They are a total delight.

Draughtsman to the British School of Archaeology Athens