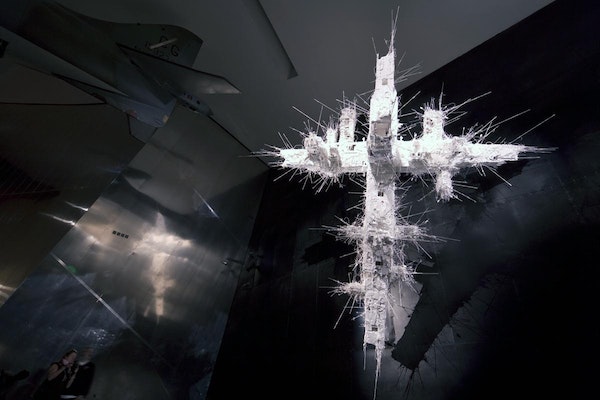 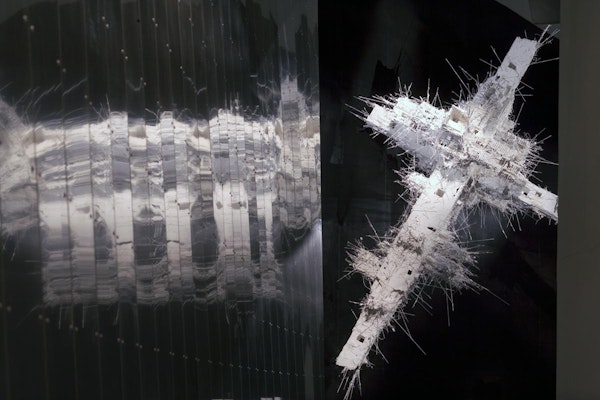 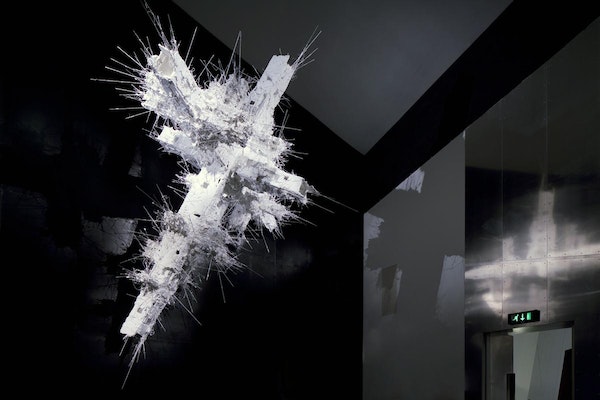 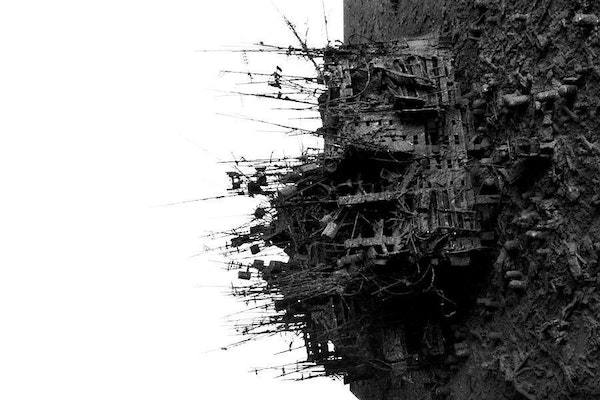 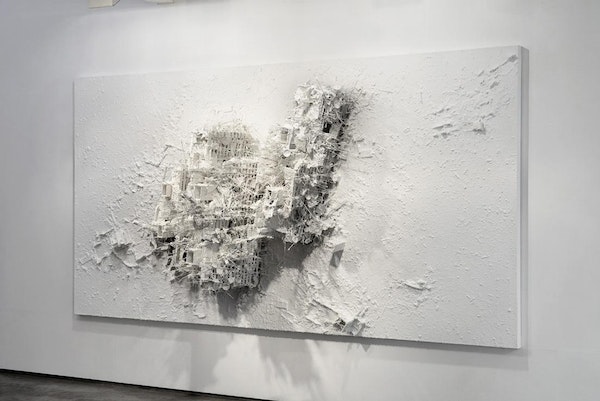 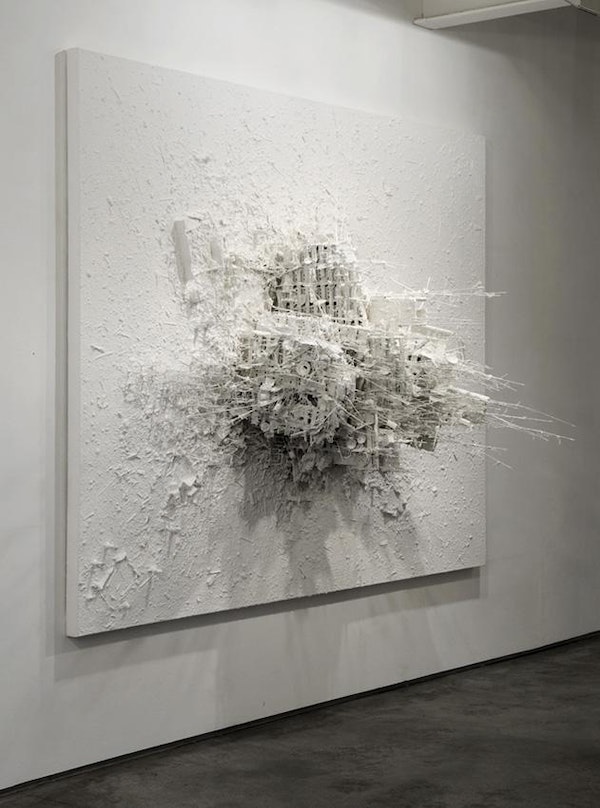 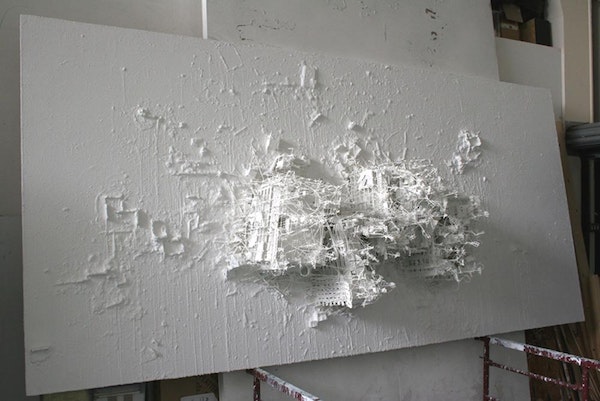 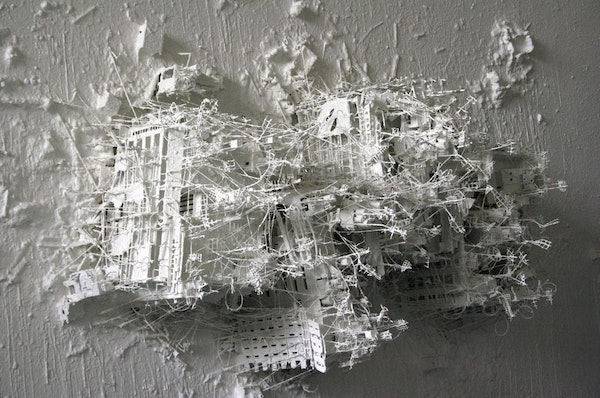 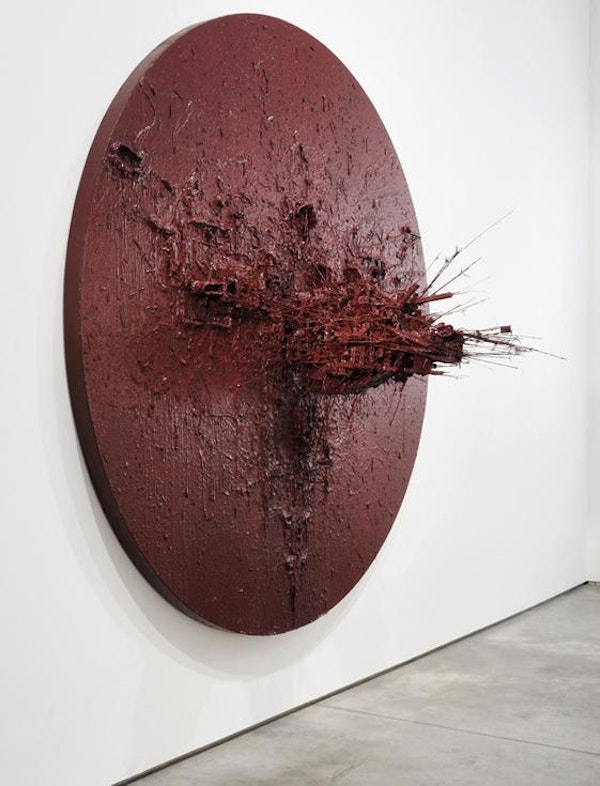 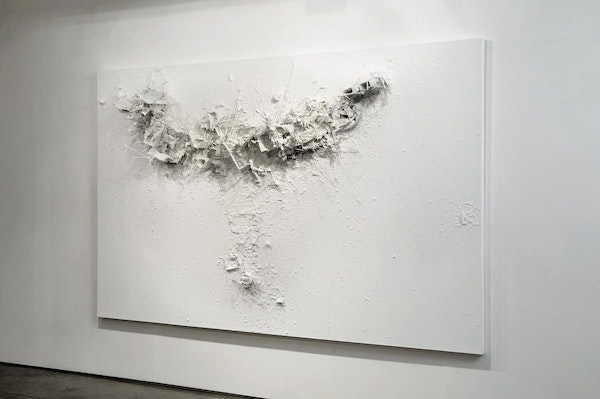 Gerry Judah has been commission to create two sculptures to commemorate the centenary of World War 1 currently on display at St. Paul’s Cathedral.

On permanent display at Imperial War Museum of the North, Manchester since 6 NOVEMBER 2010

THE CRUSADER has been created in direct response to global conflict. It reflects on modern day wars, whilst recalling the history of world conflict such as the faith based Crusades. A powerful and thought-provoking piece, this iconic sculpture comprises a 7 metre three-dimensional crucifix covered with a lattice of war torn buildings lacquered in snow white redolent of the memorial crosses at Flanders Fields. There are a multiplicity of art history references recalling to mind early paintings which celebrated the martyrdom of Saint Sebastian and the ever present Crown of Thorns, to American minimalist giants such as Robert Ryman and Jasper Johns.

THE CRUSADER is the culmination of five years work in which Gerry Judah has created a series of three-dimensional paintings of urban decimation focusing particularly on the Middle East and Afghanistan, whilst also responding to environmental damage resulting from natural disasters such as the Tsunami in the Asian Basin, New Orleans in flood ensuing from Hurricane Katrina, and the devastation resulting from the recent earthquake in Haiti. Judah’s work explores construction and deconstruction, decline and regeneration.

The setting in Imperial War Museum North’s landmark building - designed by internationally celebrated architect Daniel Libeskind to represent a globe shattered by conflict - is fitting, given THE CRUSADER’S conceptual references and Judah’s exploration of ‘presence of absence’.

FRONTIERS 2005 at the Timber Yard, London

The role for contemporary artists is to react and reflect upon life and the world around us. They may choose to celebrate form and beauty in figuration or abstraction, or perhaps to reflect on the social mores and politics of society. They may share with us a visual diary or preoccupation, coloured by their personal sensibility, or they may choose to express a sense of collective mind. Simultaneously they are creating a distinct artwork that has a unique voice and spirit, which will invite us to share their thoughts or narrative, whilst also exploring our own.

Gerry Judah’s paintings are a direct response to conflict across the globe, and the impact of that violence, whether it is the consequence of war or natural disaster. At the same time, he is fascinated by changing urban landscape, and his paintings explore the dynamic of construction and destruction. It is hard to look at his work without reflecting on conflict in the Middle East whether that be Afghanistan, Iraq, or recent months in Gaza. There are also echoes of the devastation ensuing from climate change wrought by hurricanes, tsunamis, flooding and bushfires that remind us of New Orleans underwater, or the aftermath of the Tsunami in the Asian Basin. Although on first inspection, Judah’s epic landscapes articulate global concerns for peace, he acknowledges the dangers of man’s impact on a finely balanced global ecology, and the decimation that unravels as we exploit the planet with an ever growing appetite.

Aesthetically, Judah composes a score that is made up of light and shadow. The fragility and delicacy of his work is at odds with the force and consequence of the concepts that drive him. Despite the darkness of his subject matter, he creates an explosion of light permeated with an ethereal quality reflecting the cadences and vortices of shattered architecture that we witness in daily media reports. His apocalyptic settlements constructed from scores of buildings, complete with internal structures, communications and water towers are fixed onto canvas, and then systematically destroyed. The ensuing rubble and detritus are scattered and fused onto a background of empty white canvas with layers of acrylic gesso to create silent ‘white on white’ abstract paintings.

Transcending issues of politics, race and culture, Judah creates an abstracted and disturbing aesthetic that is both mellifluous and pertinent, where the ‘presence of absence’ and loss is palpable, and we are confronted with the reality and urgency to seek solutions.

Gerry Judah was born in 1951 in Calcutta, India and grew up in West Bengal before his family moved to London when he was ten years old.

He studied Foundation Art and Design at Barnet College of Art (1970–1972) before obtaining a First-Class Honours degree in Fine Art at Goldsmiths College, University of London (1972–1975) and studying sculpture as a postgraduate at the Slade School of Fine Art, University College London (1975–1977).