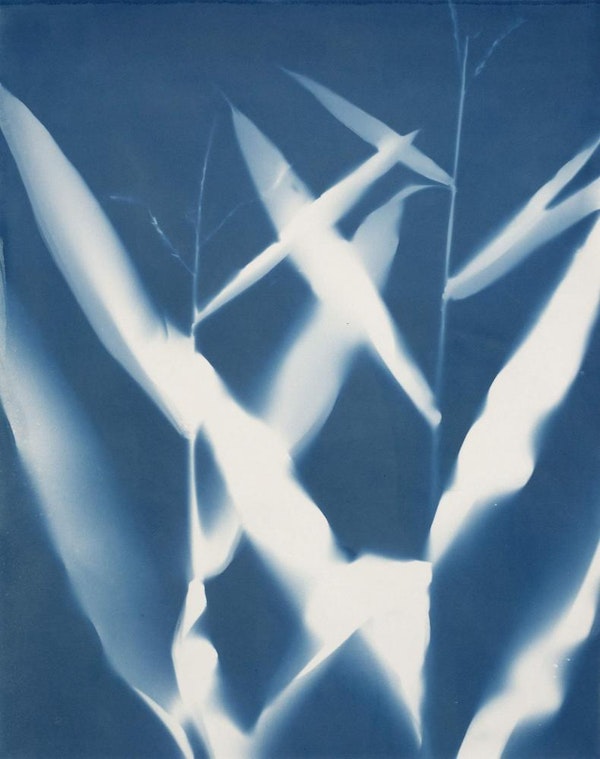 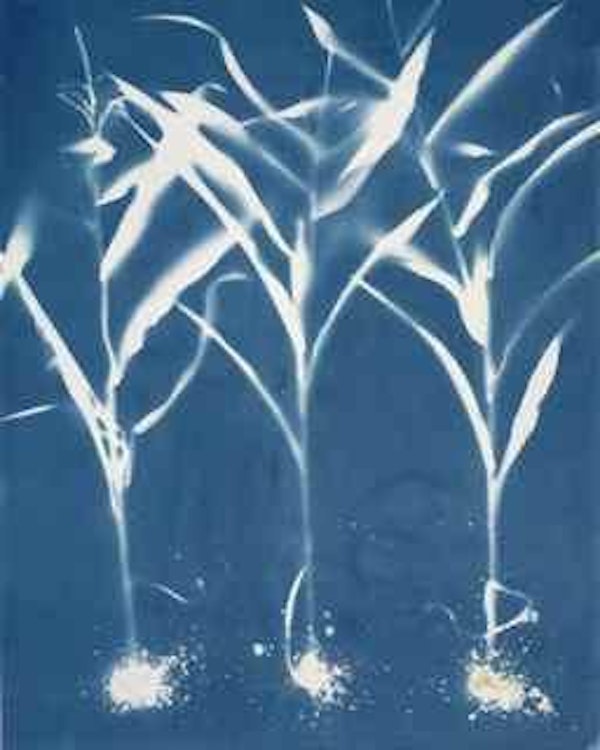 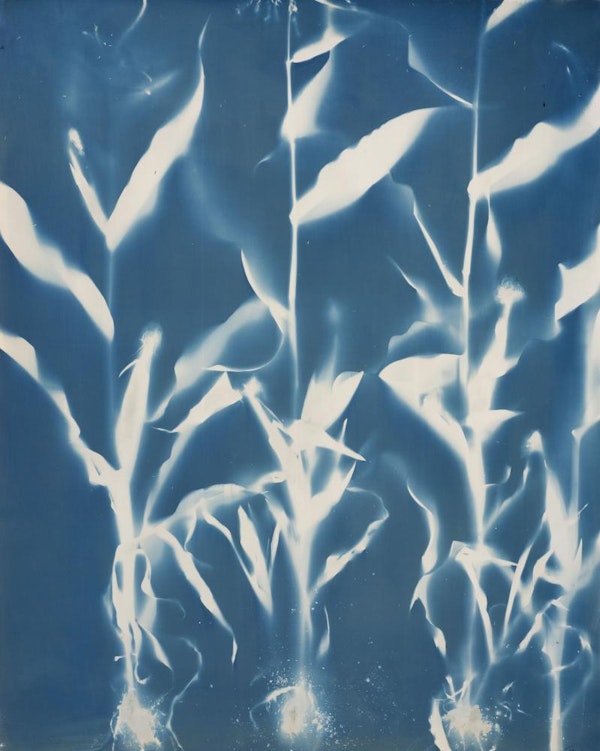 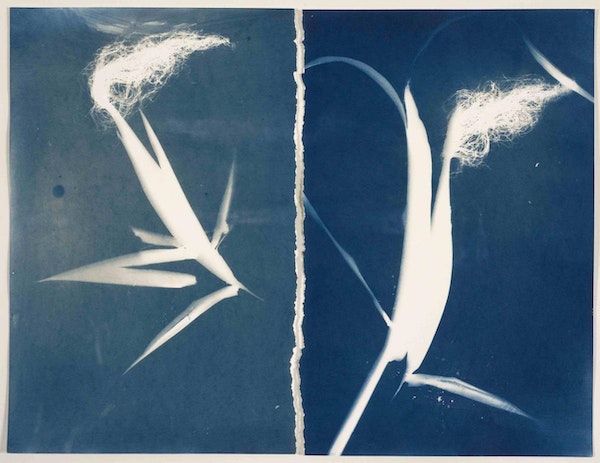 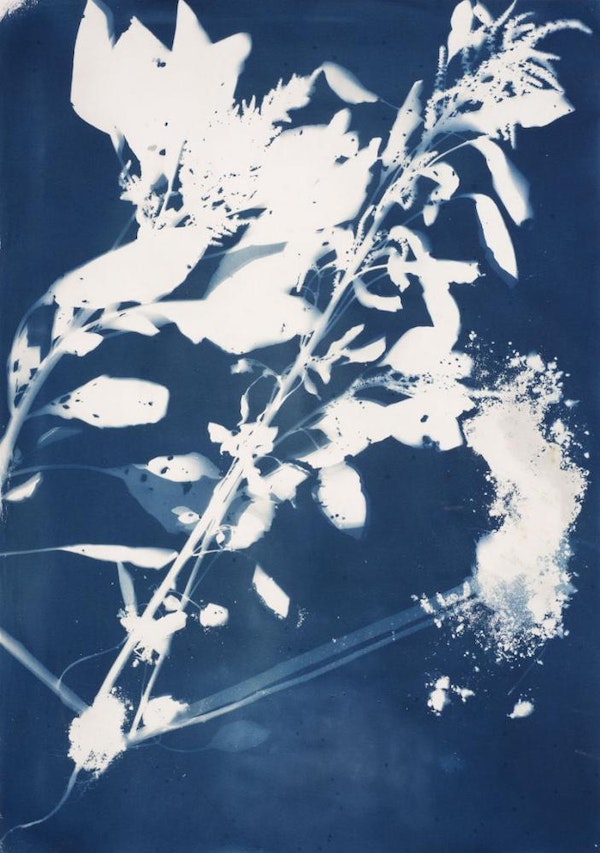 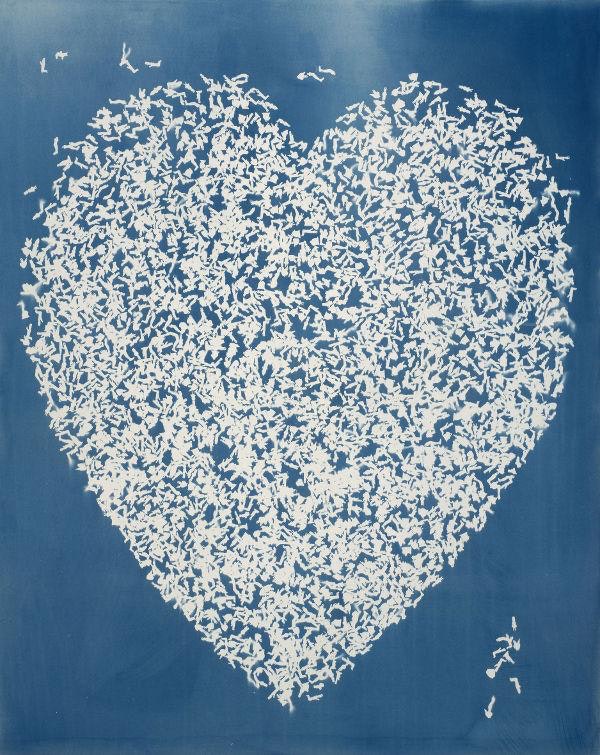 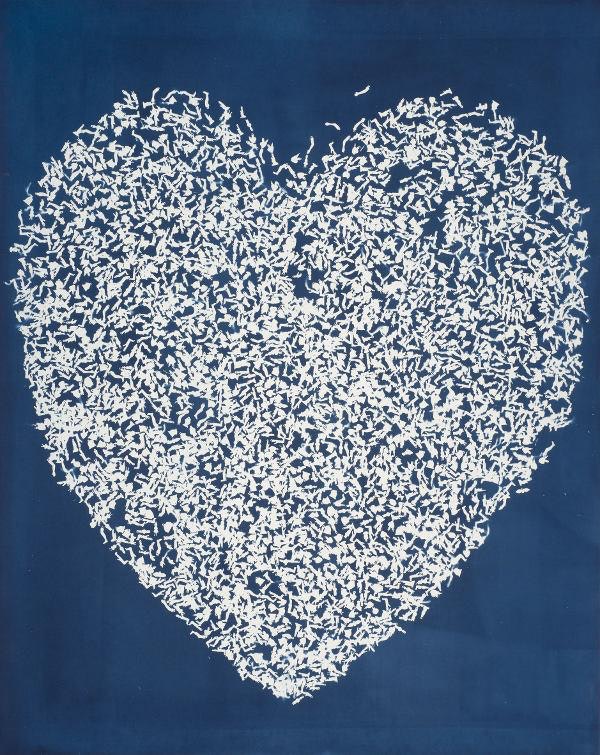 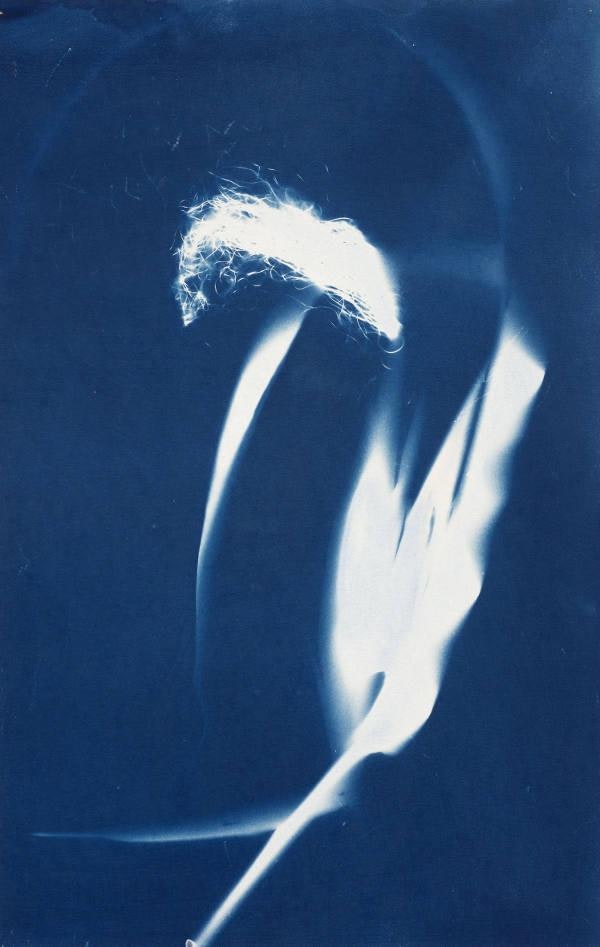 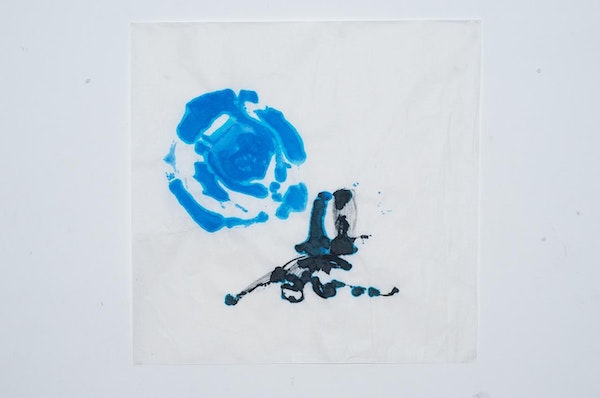 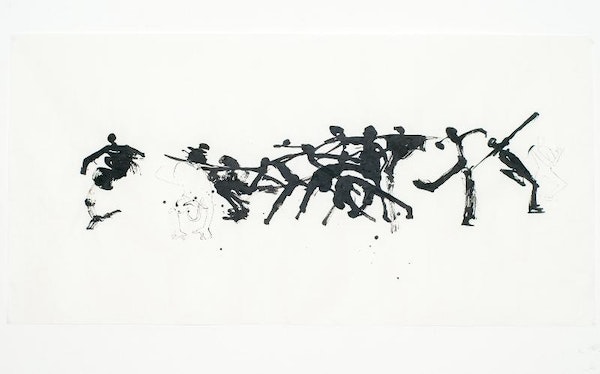 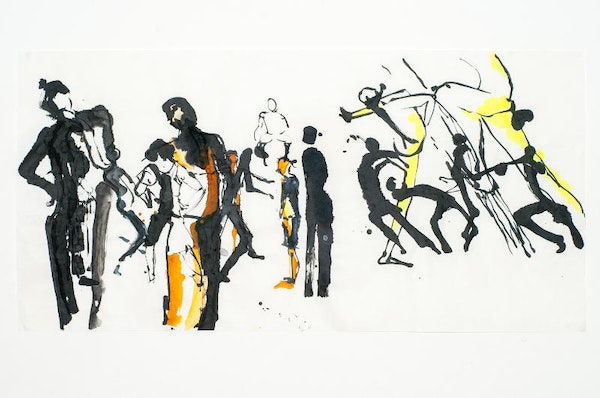 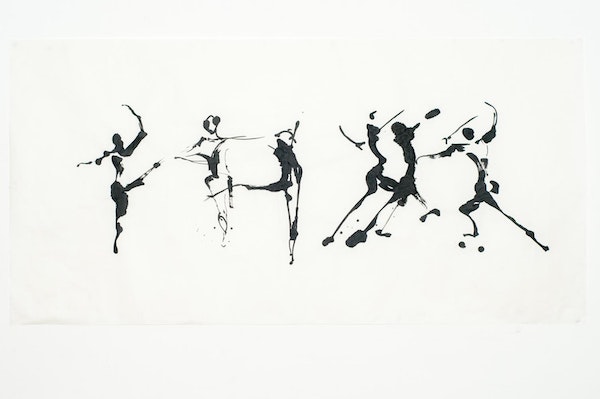 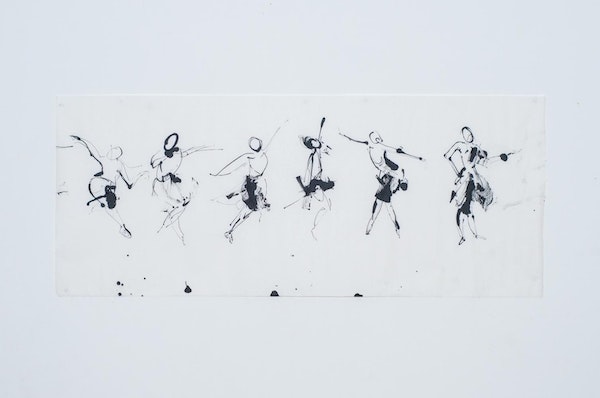 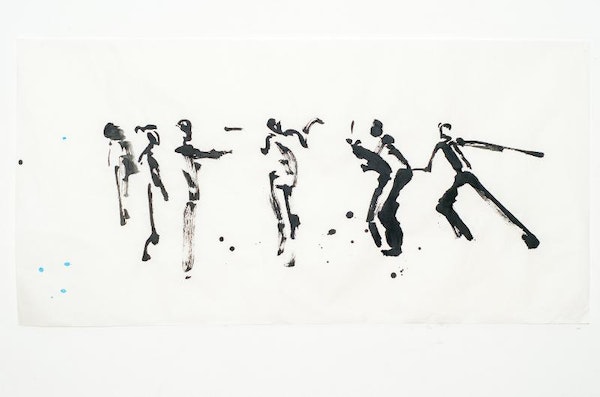 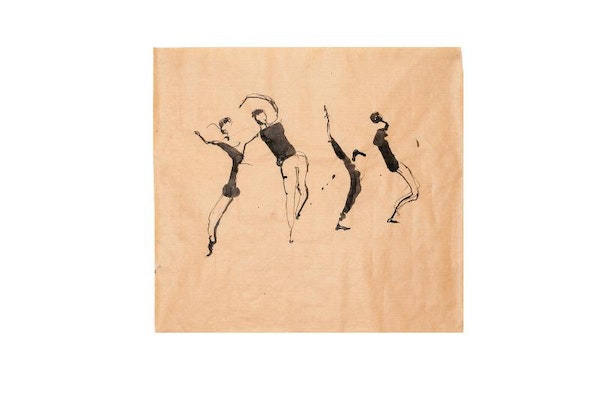 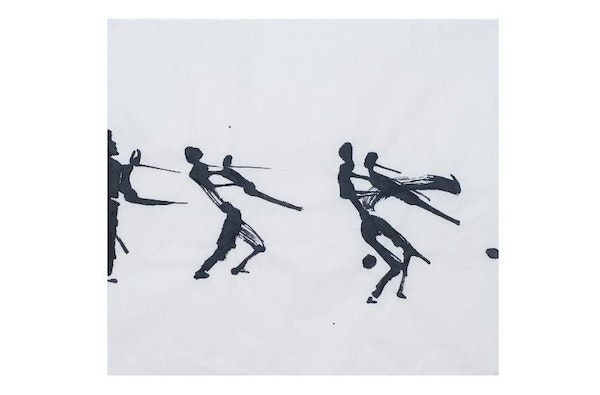 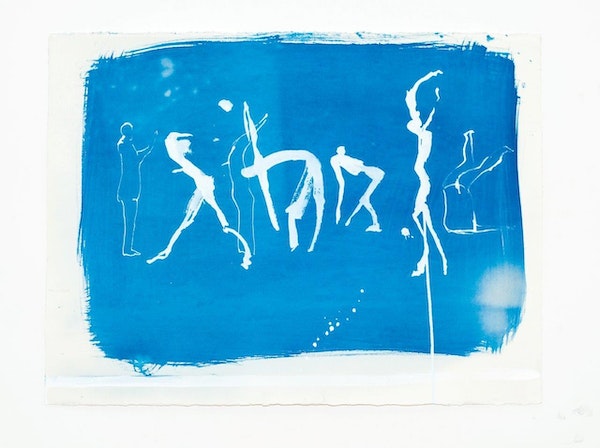 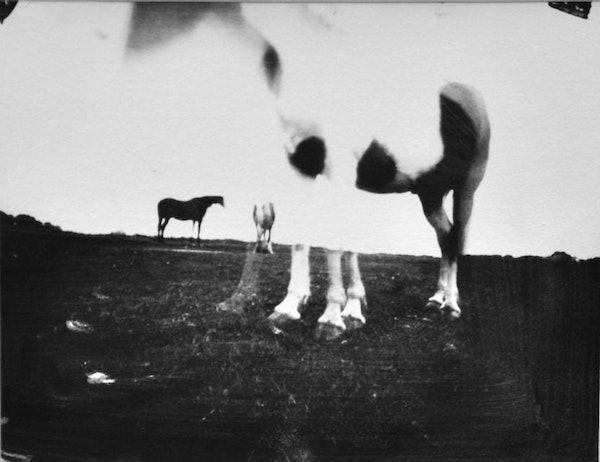 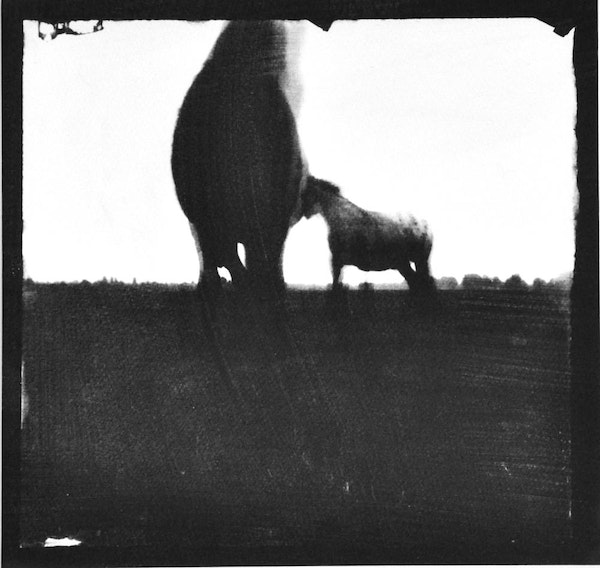 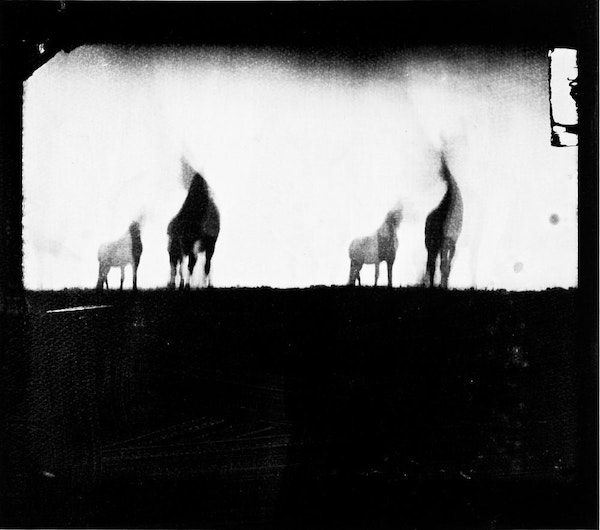 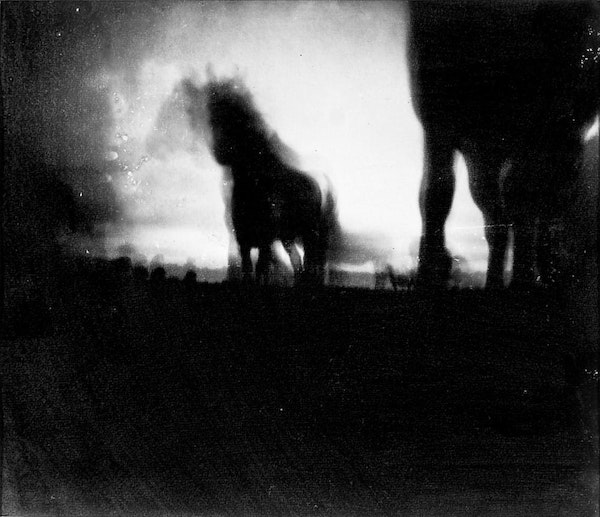 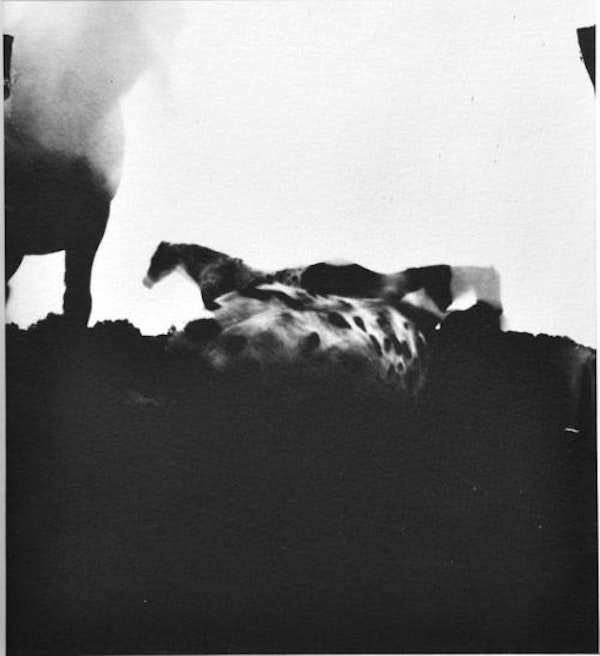 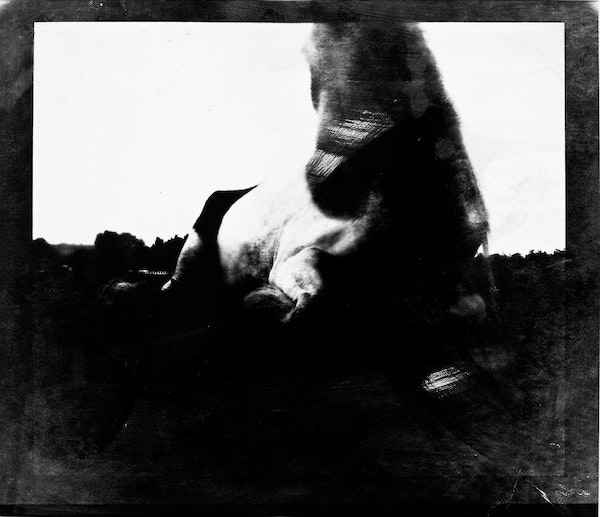 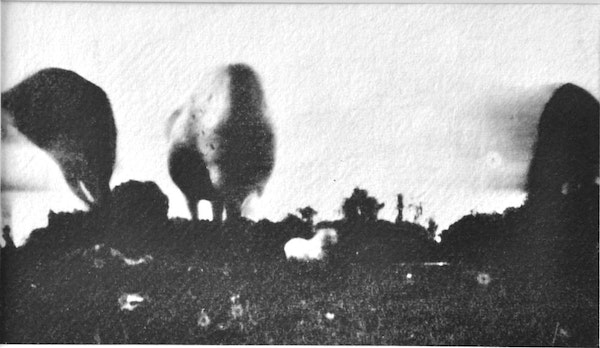 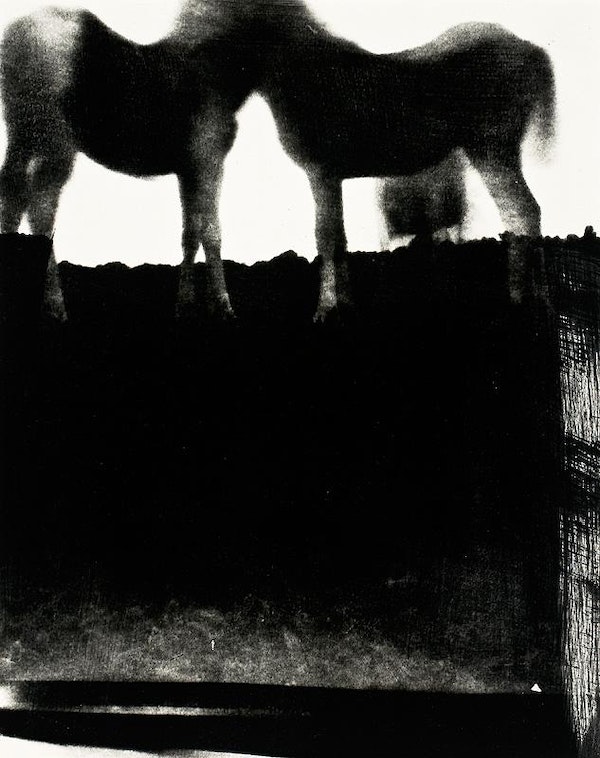 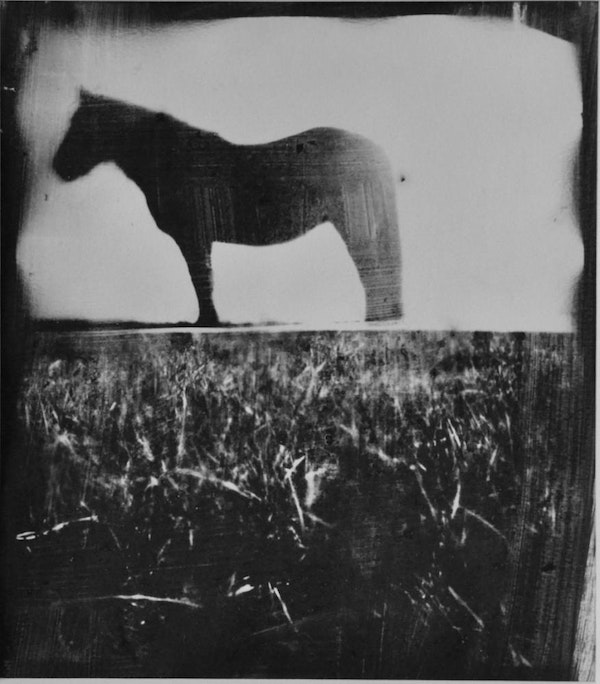 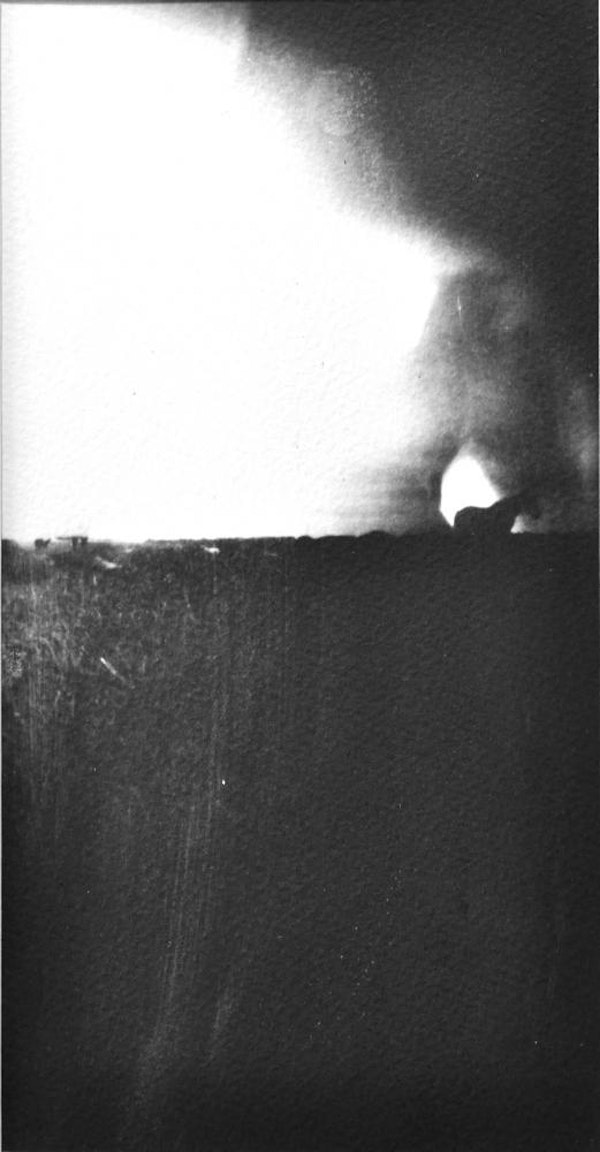 LOVE & KISSES an exhibition of work by British artists of drawings, paintings, sculpture and photography.

Antonia Bruce has created cyanotypes of milagritos (small brass folk charms) that are purchased in Catholic churches across Mexico in exchange for prayers for love, relationships and more… Shaping the milagritos across the page into hearts, the offerings are developed onto paper that is brushed with iron compound and developed under a Mexican Sun to create the white on blue silhouettes of individual prayers.

Antonia Bruce initiated a collaborative exchange between British and Mexican artists over five years, responding to the culture of Oaxaca around staple foods such as corn, cactus, honey etc… She has also curated a wonderful exhibition of ex-votos or devotional paintings that was shown at Wellcome Trust in London.  Her Milagritos Hearts follow on from the devotional theme.

Rose Arbuthnott  : |”One morning in Mexico, I began the inordinately simple task of drawing faces ….”

Rose was one of the artists in residency in Part One of the First Foods Project.  She has created a beautiful body of portraits in charcoal on paper and oil on board.  Her simple line drawings are powerfully emotive catching the pathos in a look, a kiss, a gesture between two lovers.

Antonia Bruce attended Newcastle Polytechnic and went on to work in Film Production.

Nicholas Arbuthnott is showing heads sculpted in stone.  His muses embrace the classical with lines that recall the elongated melancholy of Modigliani and conversely Picasso-esque reference to tribal art and cubism expressed in sculpture and paintings such as Les Demoiselles D’Avignon.

Surrounding the growing of corn, are the many rituals, offerings, music and dance that have evolved since man first cultivated crops. Antonia’s cyanotypes capture the corn cobs that tower above the farmers, moving like dancers, in the spirit of freedom. Laid against heavy duty watercolour paper which she paints with a solution of iron compounds, the silhouettes of her subjects are developed in daylight, creating exquisite shadows on blue. This extraordinary body of work follows on from Antonia’s previous exhibitions of drawings of dancers and pinhole photography. Her chosen medium invariably embraces an element of film and movement.

Corn is the food staff of life, the ‘first food’ for many. The natural diversity of maize grown over thousands of years contributes to our treasured bio-diversity, and is an essential resource for mankind. Debates over genetically modified foods raise issues and concerns for all.

Antonia Bruce has been working on a cooperative exchange between UK and Mexican artists, responding to ‘First Foods’. In Mexico’s Heartland, ‘everyman’ has a perceived right to his own plot ‘La Milpa’ - to grow his own corn, beans and squash. Indeed, the expression Viva La Milpa! is core to Mexican culture.

Antonia_: “I worked with plants picked fresh from the field and laid them swiftly on prepared paper where they left an imprint of a fleeting moment before the sun destroyed them.”_

Antonia exhibited Horse Latitudes at Art Jericho in 2010 and Blue Moon in 2014.

Antonia Bruce has created a beautiful portfolio of drawings in Indian ink that articulate the language and expression of contemporary dance. Working closely with international dancers, she draws from life in the rehearsal studio on scrolls of paper. In capturing the myriad forms of movement, she uses a ph of gestural marks that ranges from broad vigorous brush strokes to delicate hair line filaments. At times she adds colour, and perhaps a pure powdered cobalt blue for texture.

Antonia’s drawings have a calligraphic quality that reflect the fluidity and language of the individual dancers that she works with: Pierrot contemporary style sensibility of Marina Collard, classical baroque balletic dance of Susie Crow, and a rigour and dynamic that infuses Protein Dance Troupe street fights.

Susie Crow danced for twelve years with the Royal Ballet and Sadlers Wells, performing many solo roles, and has a ballet school based in Oxford.

Marina Collard, Susie Crow and Members of Protein performed at ART JERICHO at the Private View of BLUE MOON on Thursday 17 April.

At 30 to 35 Degrees North and South of the Equator, tall ships were often becalmed under ridges of high pressure. This was as treacherous to the crew as fierce storms on high seas. In this stillness, horses were thrown overboard in a bid to conserve food and water. These bands of latitudes became known as The Horse Latitudes.

Antonia Bruce has for some years been engaged by the wild horses on Port Meadow – an ancient strip of common land flanking Oxford City and bordered by the Thames. In this context, the title draws a parallel to the often ghostly sight of the herd on Port Meadow as they stand, quiet, at intervals during the day while life goes on around them.

Intrigued by an encounter with Paul Muldoon’s collection of poems Horse Latitudes, and recalling lyrics by The Doors inspired by Horse Latitudes, Antonia has transposed her own notion of the ‘horse latitudes’ into pinhole compositions.

Developing her negatives onto paper that she brushes with photographic emulsion, Antonia combines photography and painting to create compositions that are fragmented and layered, reflective of the interactions of the herd. Her photographs are partially abstracted and they pervade an ethereal ambivalence.

Since time immemorial there has existed a primal spirit which has bound man and horse. Indeed, in the shaman tradition of Central Asia, the Wind Horse represents an allegory for the human soul. Through her use of long exposure, Antonia is able to explore the theatre inherent in the daily lives of these beautiful and noble creatures. Her compositions are timeless and exquisite, and remind the viewer of a shared sensibility.

Antonia Bruce has explored this concept further with film and a frieze of drawings of the horses on Port Meadow characterized by an infinite horizon, in brush and ink redolent of calligraphy.

The title draws a parallel with the often ghostly sight of the herd on Port Meadow, an ancient flood plain in Oxford, as they stand, quiet, at intervals during the day. Juxtaposed against this huge, flat plain and a constantly changing sky the horses can take on a majestic and sometimes melancholy air.

While working with the long exposure which pin hole photography demands, a chosen horse would often positively respond to the process standing calmly, often for as long as half an hour; the only movement offered being the slight shift of its hooves, as it transferred its weight.

_The extended exposure captures the theatre of those moments and many of the pictures depict the natural movements of other horses as they wander through the frame. Making my own cameras out of wooden boxes gives me the flexibility of multiple exposure, some cameras taking as many as six images at one time, which gives ʻwalking through frameʼ a completely different meaning as the horse effectively walks through six frames. _

_Good days on the Meadow always amounted to incredible silent dialogues with the horses, which would often turn into pure theatre and even pantomime. A good day in the dark room always came as a huge surprise but could be equally sweet. Drawings were all made in situ and offered some respite from the technicalities of dark room practice. _

As a result the process becomes integral to the making of the photographs which in turn stands for a tiny amount of the many enigmatic experiences that I share with everybody who has ever spent time on Port Meadow. The project continues to be a simultaneously chaotic and compelling experience. “  Antonia Bruce 2010.