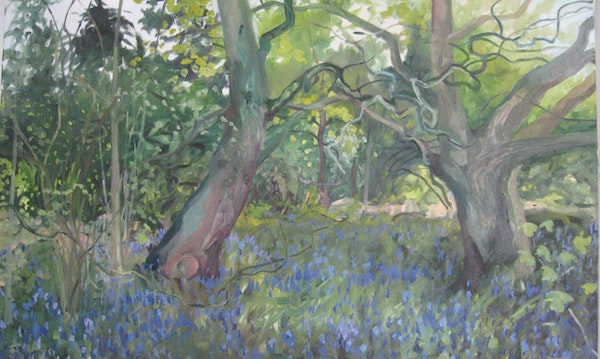 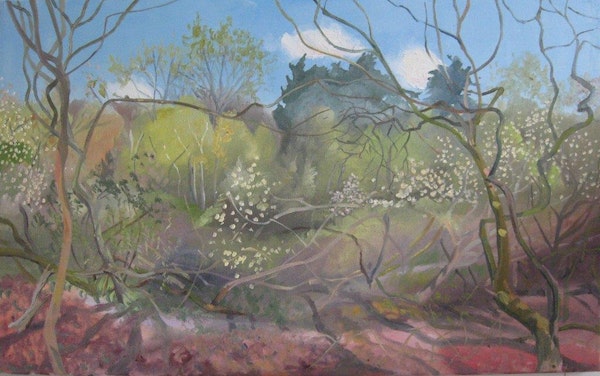 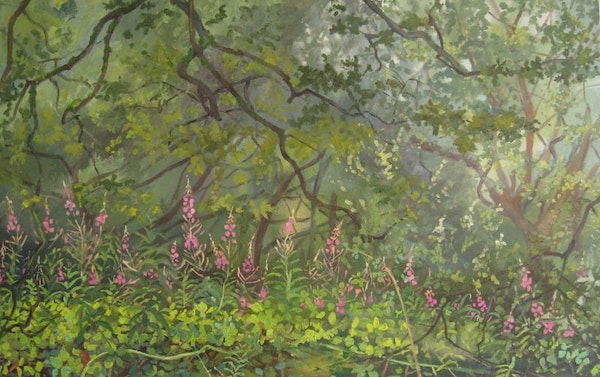 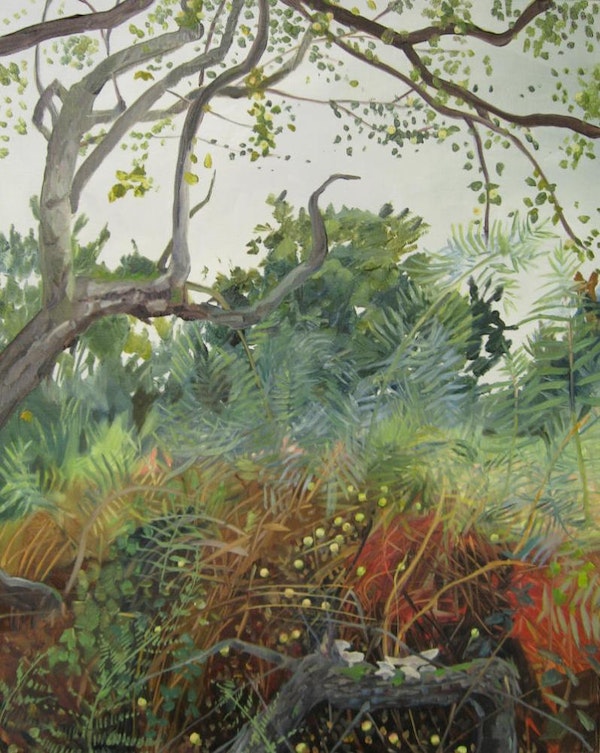 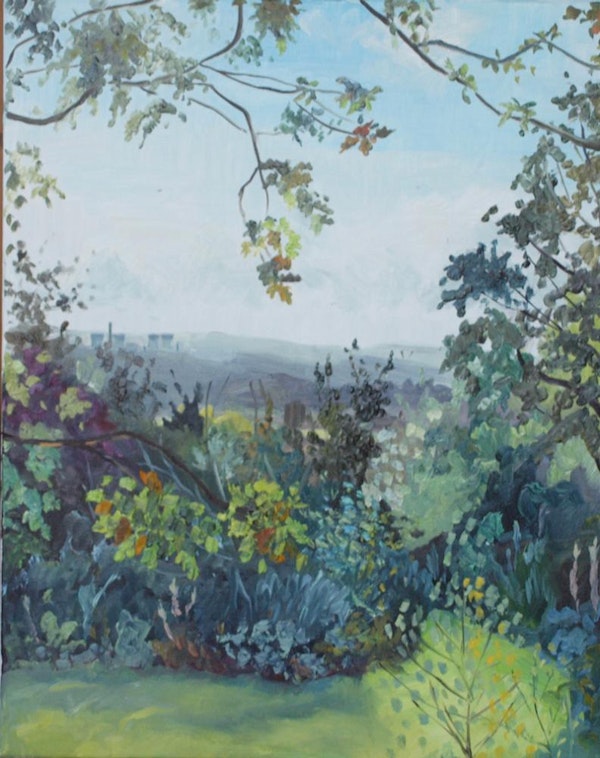 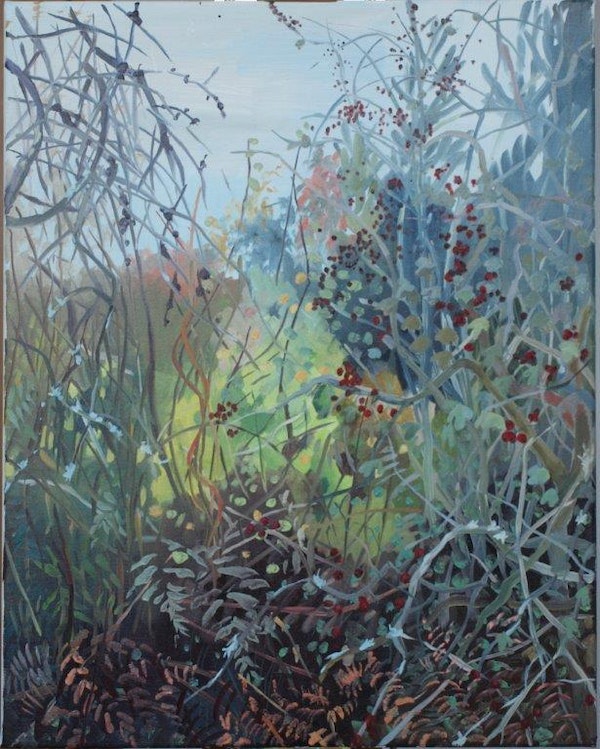 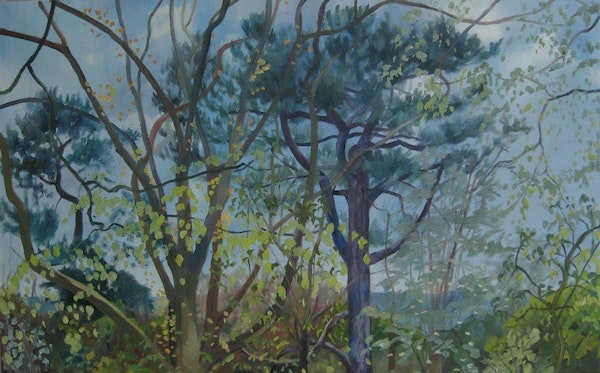 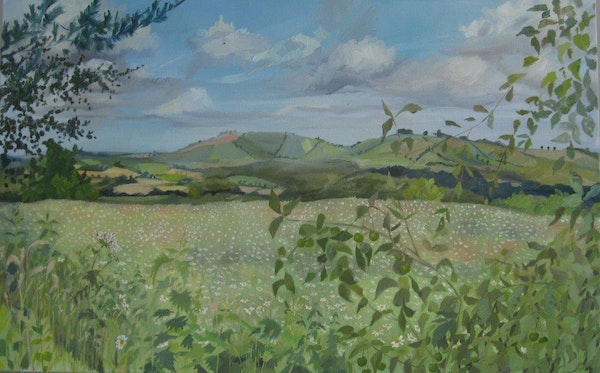 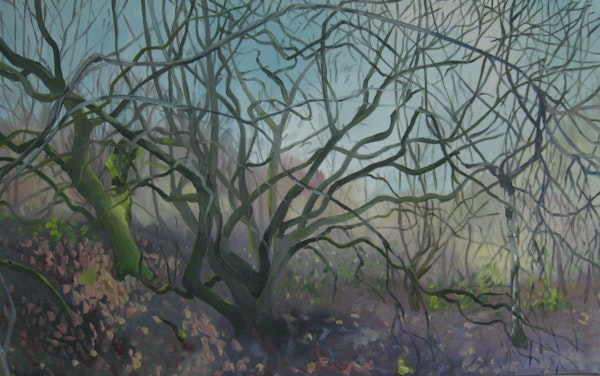 ART JERICHO presents an exhibition of paintings by EMILY AULT.. Emily has spent a year painting Shotover through the seasons. Drawn to the magic of ancient woodlands that have a tangible sense of history and tales untold, the artist explores what was for centuries a royal hunting forest with meadows and heath. A haven for wildlife and wild flowers, the old road to London crossed Shotover Hill and was a regular haunt for highway man Dick Turpin.

“My aim is to represent the emotional pull of a place in time. I paint in situ and let the painting dictate itself. I believe that painting from nature is as relevant now as ever. To immerse oneself in the sights, sounds and smells of a place, to appreciate the slow passing of time and the subtle shifts in light and atmosphere, results in work that is honest and less subject to idealised interpretation. Absorbing and reflecting upon a natural world that continues to live and breathe, despite our ever-encroaching presence, is a persistent preoccupation. As nature jostles for space against urban development, industry and roads, wild places are becoming so very precious.”

Emily began painting in earnest in 2007 which led to her first solo show in the Highgate Gallery in 2009. Before that she did an MA in Children’s Book Illustration at Cambridge School of Art. She also has a degree in Russian and English from St Andrews University. After working in film video television production she lived in Paris for five years where she began to study art. The artist has paintings in private and public collections.

EMILY AULT spent a year painting through four seasons, and painting en plein air, as opposed to working in the studio from photographs, lends a distinctive feel to the work. Seated quietly for hours at a time, the artist infuses the sights, scents and sounds of the woods into her compositions.

For those who might not know Shotover Woods, they lie on the London side of Oxford at the top of Old Road, aptly named as it was the original road from Oxford to London. The woods were part of the Royal Hunting Forest for hundreds of years, and date back to the Doomsday Book. The Old Road was a regular haunt for Dick Turpin and other highwaymen who ambushed travellers. There is a sense of history and tales untold that pervade the woods, and legends of roaming giants who played marbles with large stones in ‘The Sandpit’ where ‘Matilda’s Tears’ were shed (see Emily’s painting). Matilda was the daughter of Henry 1, and cheated of her claim to the throne, she fled London in fear for her life. She was said to have wept with relief when she reached Shotover and was able to see the spires of Oxford.

Despite the Scots Pines that line what remains of the Old Road tracking across the top of Shotover, the woods are largely deciduous and fall south from the Old Road, east and west with a wonderful array of woodland, heath and open fields fringing them so that you can catch open views from Shotover towards Buckinghamshire, The Chilterns and across to the South.

The Woods are quintessentially English - one imagines Sherwood forest. They are not managed, such as Wytham Woods, or landscaped like the Arboretum at Nuneham Courtnay or the gracious Parklands of Blenheim. Hazel used to make bows, ash and old oaks abound, some dating back to Elizabeth 1. Shotover remains a wild and magical place and the terrain, which drops down towards the south side with paths that bottom out and then climb up steeply make it an exhilarating place to explore.

Deciduous woods are an increasingly rare and precious haven for wildlife, and Shotover provides a home for polecats, stoats and weasels, badger, fox, brown hare, hedgehogs, voles, mice, shrews, grey squirrels, moles and bats. There are over a 1000 species of beetles on Shotover, and many butterflies and moths. Any true English woodland is of course home to roe, fallow and muntjac deer. If quiet, you can catch a glimpse as they pick their way through the trees.